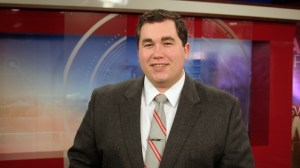 Stuart Hammer joined Eyewitness News in October 2014 and works as a dayside reporter.

Stuart is a native of Louisville and went to school at the University of Kentucky, graduating with a B.S. in Journalism. At UK, Stuart produced, reported, and anchored the UK Student News Network, a live broadcast in the Lexington market. Outside of work, Stuart is passionate about the Big Blue and you’ll always find him cheering for the Cats.

Before coming to the Tri-State Stuart worked for nearly a year in the coal fields of southern West Virginia at WOAY-TV in Oak Hill. Among breaking news and feature stories, he covered a chemical spill that created a water crisis, the New Orleans Saints training camp, and a PGA Tour golf tournament at The Greenbrier.

If you have a story idea or just want to chat, send a note to shammer@tristatehomepage.com.